Dear America – We Are Better Than This.

Posted on December 31, 2014 by humanizing_the_badge

Stop it.  We are better than this.  We are better than hate.  We are better than segregation.  We are better than racism.  Over the past few months, I have spent a substantial amount of time reading the comments under news articles or Facebook posts.  In a world where everyone is eager to utilize their civil liberty of freedom of speech, we are utilizing it wrong.  Don’t get me a wrong, I know there is a silent majority reading the same comments and choosing to remain quiet but there is a very loud minority misrepresenting us as a whole.  This isn’t a one sided argument either.  There are human beings on both side of the fence that are being awful to other human beings.  There are human beings who have forgotten that you can’t fix the problem by becoming part of it.  It’s counterproductive.  It’s empty and fruitless.  Simply, it’s wrong.

Yes, I am a police wife.  Yes, I love my family in blue.  Yes, I will stand with them forever but I am not so naive to say that there isn’t a problem.  I’m not so naive to say that there isn’t a gross prejudice that feels ever tangible in the air.  I am having trouble with our desire to over-compartmentalize one another.  I am having a difficult time understanding why we are so desperate to label and persecute one another.  In an interview with Oprah, Raven Symone set social media on fire with her response to labelism.  I have to say that, out of everyone’s views on how America was intended to be, I felt more connected to her response than anyone elses.  She was tired of being labeled.  She was tired of being compartmentalized and she wasn’t going to do it any more.

“Oh, girl, don’t set up Twitter on fire,” Oprah said. “You’re going to get a lot of flak for saying you’re not African-American.”

“You are a melting pot in one body,” Oprah said.

“Isn’t that what America is supposed to be?” Raven declared.

And, she’s right.  We are settling for mediocrity.  We are allowing ourselves to not expect more from one another.  In fact, we are blatantly setting ourselves up to expect less.  I’m not saying that we shouldn’t embrace our cultures.  I’m not saying anyone should be ashamed of their skin color or deny their history.  I’m saying that you can’t hold an entire group of people accountable for the actions of one.  You can’t assume that all Priests are pediphiles.  You can’t assume all teachers are uninvested.  You can’t assume that all black teenagers are going to rob you in the parking lot.  It’s unfair to label every police officer a racist.  It’s even more unfair to label a black officer an Uncle Tom.  Why are we persecuting people who are signing up to make the world better?  Why are we criticising those who are trying to make their lives better?

Yes.  I’m a police officer’s wife that believes their lives matter.  I believe that they are grossly underappreciated, misunderstood, and villainized in the courts of public opinion.  But, I also believe that black lives matter.  I believe that all lives matter.  When you create an environment where people are wearing t-shirts that say “I Love a Dead Cop” or you see people holding up signs that say “All my heroes kill cops”, how is this helping the issue?  How is this helping the race relations in America?  We are creating an environment where we are raising up black teenagers to fear and hate the police.  We are creating an environment where officer’s are going to fear for their safety more quickly than they might have before people started murdering them while they sat in their patrol cars or ate lunch in a restaurant.  We aren’t making anything better.  We’re making it worse, America. 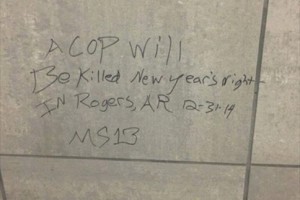 When a road construction worker gets struck by a vehicle, people don’t minimize it by saying that it was just part of the job.  When a nurse gets stuck with a hypodermic needle, people don’t rally in the streets proclaiming their happiness for her misfortune.  When a firefighter succums to his injuries he attained on the job, you most certainly won’t see people holding up signs that say “The only good firefighter is a dead firefighter.”   They don’t try to justify it by saying “they signed up for it.” We aren’t going to fix our brokenness by trying to honor the loss of life by creating more loss of life.   You can’t fight perceived injustice with more injustice.

How do we make it better? 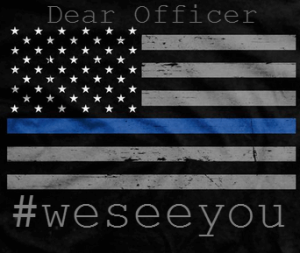 A group of creatives that is dedicating their talent to encouraging and supporting our Law Enforcement and their families. This is not a site where we are willing to allow negative comments about Law Enforcement. Don't even waste your time. If you want to debate something, leave it to the comment sections in your local news paper. It isn't welcome here. This is a place to encourage and support our Law Enforcement Families. HTB Productions 616 Corporate Way, Suite 2-4184 Valley Cottage, NY 10989
View all posts by humanizing_the_badge →
This entry was posted in Uncategorized and tagged #alllivesmatter, #bleedingblue, #bluelivesmatter, #cops, #husbands, #LEOW, #LEOWSTRONG, #police, #policefamily, #policelivesmatter, #policewives, #sacrifice, #thinblueline, #weseeyou, #wives. Bookmark the permalink.

6 Responses to Dear America – We Are Better Than This.